Cattle farmers are recommended to undertake starling controls to protect their feeding areas, as research shows the negative effect the birds have on ration composition could equate to £40,000 a winter

Given the proven financial implications of starling infestation, farmers could benefit from assessing the scale of the issue and, if necessary, investing in effective starling control.

J&W Tait are proud to work with Anode Feeds Ltd the manufacturer of Avianex to provide effective starling control to help support the local community.

Starlings can cause major economic loss in livestock systems around the UK. Starlings feed selectively on maize grains, thereby reducing both the feed value of the ration and consequent milk output. There is also strong evidence that European starlings harbour E.coli, Salmonella and Campylobacter and can spread pathogens between farms. Therefore, this indicates that the losses on farm are not caused just by loss of feed but the milk production lost from less feed and also diseases transferred to cattle from bird faeces.

What is the cost?

According to research by AHDB Dairy, starling infestation has been shown to cost dairy farms up to £153 per day per 100 cows in feed losses, and health related issues.

Ingredients contained in Avianex will irritate the stomach of birds. They associate this ill feeling with the feed they have eaten and therefore will go elsewhere to find alternative feed sources. It releases volatile polysulphides into the atmosphere, which creates an odour that birds dislike. Trials at Bridgwater College have been effective at a feed rate of 12.5g/day, although for severe infestations feed rates could increase to 25g/day It takes about 1 week for the cumulative effect to cause birds to alter their feeding pattern

Avianex contains ingredients that irritate the stomach of birds. They associate this ill feeling with the feed they have eaten and therefore will go elsewhere to find alternative feed sources. Avianex also releases volatile polysulphides into the atmosphere, which creates an odour that birds dislike.

Experience has shown that feeding Avianex to lactating dairy cows on TMR diets at a feed rate of 12.5g per cow is sufficient to deter starlings from settling into a pattern of feeding at that farm. If feeding twice a day, only add Avianex to the morning feed, as starlings only feed during the day. It may be useful to make dummy batches of TMR with waste maize silage including Avianex, which can be left near clamps to feed starlings for a short period. It may be advantageous to include a higher level of Avianex in these dummy batches, but ensure cows do not have access to them.

Avianex needs to be fed consistently to be effective. Avianex takes about 1 week to cause birds to alter their feeding pattern. Ensure that Avianex is fed every day and that the feed is mixed thoroughly. 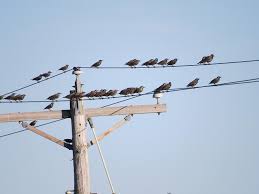